In the Colosseum players can send a team of five Heroes to battle against other players in the same Kingdom. The Colosseum unlocks at Castle level 10.

Players start out at the bottom of the Rankings, which is dependent on the number of players available in the Kingdom. Players move up in the Colosseum by challenging other players. Battles in the Colosseum are automatically played out from the moment the Deploy button is clicked, so leaving the Colosseum before the battle ends has no effect on the outcome. When players defeat another player of a higher ranking, they will exchange rankings with that player. The amount a player may rank up for each battle will decrease as the player moves up through the ranks.

There are two different Hero Formations in the Colosseum:

The Might, Grade and Rank of the Heroes being used will contribute to the overall strength of the Formation.

There are five free entries daily in the Colosseum, and players can use Gems to get additional entries. The Adult Skill of the Familiar Bonehead will also provide 3-10 additional entries every 1-2 days, depending on the skill level. Players can change their opponent list at no cost.

Players can view the previous 20 battles by clicking the

Battle Report button. The top 100 players can be viewed by pressing the

When a player leaves a Kingdom, their position in the ranking will be replaced by a NPC named Guard. The ID following the Guard name will vary depending on ranking; Guard.2000 being the weakest and easiest to defeat, and Guard.0001 being the strongest.

* Positions are placed sequentially according to the following priorities: Tanker-Melee-Wizard-Supporter-Ranged
* No# affects the arrangement order of heroes in avatars, Limited Challenge, and Colosseum.

Gems will be earned every three hours depending on the Colosseum ranking. The Colosseum can store a maximum of 20,000 gems. 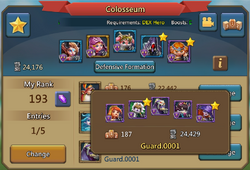