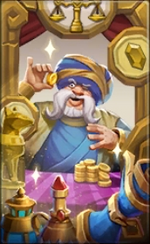 During certain holidays and events, special Event Shops will appear in the Events menu for a specified duration.

These shops are similar to Bargain Stores, except special event currencies are used in order to trade for a limited stock of various items. These currencies can be earned through completing Solo Events and Hell Events, earning points in Lords Cup or Kingdom Clash, hitting Monsters, and by logging in daily. Unlike the Bargain Store, item stock will not refresh daily. Any remaining currency items will be removed when the shop closes.

Appeared during Father's Day celebrations. Players trade Stache Badges for the items below.

Appeared during Lunar Festival celebrations. Players trade Moon Orbs for the items below.

Sanctuary Chests, which grant 10 Blessings. They can also be purchased at $0.99 for 60 Blessings.

Appeared during Guild Gala celebrations. Players trade Gala Torches for the items below. Gala Torches are obtained from