Start a Wiki
A Gem Lode is a tile which can be gathered to obtain Gems, similar to Gathering other resources.

Gem Lodes Spawn in Levels 1-5, during Special Events and in the victorious Kingdoms, after Kingdom Clash, aka KvK.

Unlike other resource tiles, Gem Lodes spawn in intervals, with a few minutes in between the low levels, and over an hour between Level 4 and 5. Gathering the Lodes, or leaving them partly gathered, has no effect on the spawn rate.

A large number of Level 1 Lodes will spawn. The number of Lodes that spawn, decreases with each Level. Gem Lodes Levels 1-4 will spawn up to three times. Level 5 Gems Lodes, only spawn twice.

Note: Gathering Speed boosts from Talents, Equipment and other Research, do not boost gathering speed for Gem Lodes. However, army capacity and Gathering Troops Travel Speed bonuses do apply.

After KvK, Gem Lodes spawn every 6 hours, starting with Level 1 Lodes, and increasing up to Level 5, in the winning Kingdom. If only two Kingdoms have competed against each other (1 vs 1), Gem Lodes will only spawn in Levels 1-2, throughout the defeated Kingdom.

If three or four Kingdoms have competed against each other, Gem Lodes will spawn in Levels 1-4 throughout the defeated Kingdoms. The exact Level of the Gem Lodes depends on the number of Kingdoms participating in KvK, and their Rank in the event. 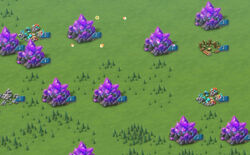 Level 1-2 Gem Lodes
Add a photo to this gallery
Retrieved from "https://lordsmobile.fandom.com/wiki/Gem_Lode?oldid=21255"
Community content is available under CC-BY-SA unless otherwise noted.