Kingdoms are the individual realms, or servers, that players interact on. Each Kingdom has a similar layout with various Wonders arranged around the map, but activity will vary depending on the occupants. Certain Kingdoms, such as the Royal Battleground and Dragon Arena, will have special rules about entering.

In your Turf, press the

And when in the Kingdom Map, press the

World Map button to view all the kingdoms.

Kingdoms are divisions which players are assigned to as they begin the game. Each of the kingdoms have their own ruler, and those rulers are capable of assigning their guilds to fight for the rank “Emperor”. The rank Emperor is the leader of all the kingdoms and therefore best in the game. 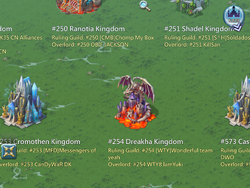 Kingdoms in the World Map