Kingdom Clash, known also as Kingdom vs Kingdom (or KvK, for short), is a 24 hour event (technically lasts exactly 23 hours 30 minutes) where different Kingdoms in Lords Mobile compete against each other. When individual players score points, these will contribute to their Kingdoms overall point count.

The number of Kingdoms competing against each other during KvK varies from 2-4 Kingdoms. The point requirements for Solo War, and Rewards for the event, depend on the number Kingdoms participating.

Battle Period. When the Battle Period ends, players will be automatically relocated back to their original Kingdom, to a random location.

Note: KvK is not available in protected Kingdoms.

KvK occurs every 3 weeks, and takes place on either a Saturday or Sunday depending on your timezone, and always ends just before Guild Fest begins. The KvK schedule follows the rotation below:

The "Kingdom Clash" special bundle always appears in the store and lasts throughout the duration of timeslot (4), regardless of the actual timeslot being used.

If three or four Kingdoms are competing in KvK, players can score double points for occupying Wonders, Killing Soldiers and Destroying traps in a specific Target Kingdom. The Target Kingdom is displayed on the KvK Event Board and rotates after a period of time.

There are 5 different ways to score points during KvK:

The day after KvK Gem Lodes will spawn throughout the Kingdoms, which can be gathered similar to other resource tiles. The Gem Lodes spawn every 6 hours, starting with Level 1 Lodes, and increasing up to Level 5, in the winning Kingdom.

If two or three Kingdoms have competed against each other (1 vs 1), Gem Lodes will only spawn in Levels 1-2, throughout the defeated Kingdoms.

If four Kingdoms have competed against each other, Gem Lodes will spawn in Levels 1-4 throughout the defeated Kingdoms. The exact Level of the Gem Lodes depends on the number of Kingdoms participating in KvK, and their Rank in the event.

Note: These are the Rewards for players at Castle Level 25. 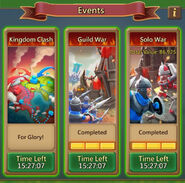 KvK in the Events Menu