The Kingdom Map is the screen in Lords Mobile where players can view Kingdom components, such as players, resources, and wonders. Players can re-enter their own Turf, by tapping

in the bottom left corner. Players can enter the World Map by tapping the

The Kingdom Map consists of a 2.5-dimensional grid of tiles on a coordinate plane from (X:0,Y:0) to (X:511,Y:1023). Individual tile positions can be saved as a Bookmark, be Pinned, or posted into the Chat.

Any terrain tile can be considered occupied if some other feature, such as a castle or resource tile, takes its position. Lakes, Shores, and Wonder's Land tiles cannot be occupied.

In the Kingdom Overview players can view the map of a Kingdom.

button on the left side of the screen. The Overview is shown below: 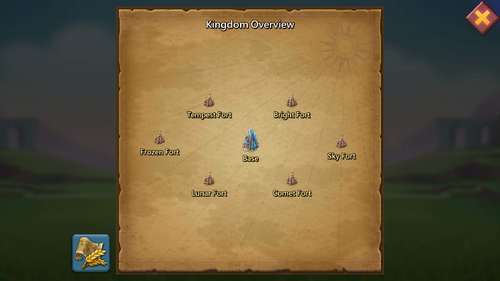 Tapping on the Resource

button will reveal the Resource Tile Chart, shown below: 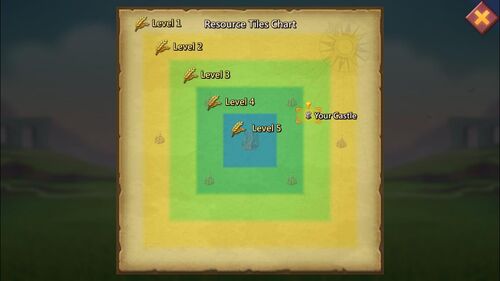