Lords Cup lasts 24 hours and has four Matches which begin every 6 hours, and last for 120 minutes each. At the start of each Match, balls will spawn in the Ball Zone, which players can kick into Goals with their troops to score points. The goals are Wonders and Darknests.

To view the Ball Zone, tap on the Kingdom Overview button

on the Kingdom Map.

Balls kicked to the Base and Forts will disappear, and respawn on the map. When a ball hits a Darknest, the Darknest will disappear instead, and a new one will respawn close by. When the ball lands, points are given for the tile it lands on, plus the eight tiles around it. So if a player kicks the ball in the middle of two Darknests, they will get points for both.

If a ball lands on an obstacle, either a resource tile, monster, castle, camp, lake, shore or another ball, it will roll onto the next empty tile, in the same direction. If a ball is kicked, or rolls, out of the Kingdom map, it will disappear.

Points accumulated from all 4 matches will go towards a players final score.

Points accumulated from all members in a guild, will go towards the final guild score.

Troops will automatically be grouped by Tier when they are deployed to kick a ball.

All members of the guild will receive the Guild Rewards when a checkpoint in reached.

The top 30 guilds that have completed all three checkpoints, will receive the Ranking Rewards.

Solo Cup is quite easy to complete with the right troops and a little time to play, and the rewards are worthwhile, as Monstrous Chests and Blazing Embers can be obtained. 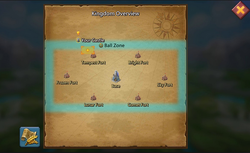