During Super Gem Time all Dark Essences will transmute into Gems.

The image below created by T'O is widely circulated online, and it displays a Lv. 13 Dark Essence transmuted into 600 gems. This is however likely an 8 hour Dark Essence, mistakenly depicted as a 12 hour. 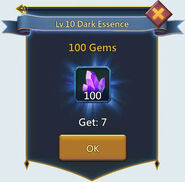 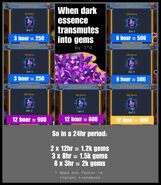 Image created by T'O
Add a photo to this gallery
Retrieved from "https://lordsmobile.fandom.com/wiki/Super_Gem_Time?oldid=27894"
Community content is available under CC-BY-SA unless otherwise noted.